The 30-year-old’s death will put more pressure on the MACC, which has been accused by the opposition of conducting selective investigations.

Teoh, the political secretary of Seri Kembangan assemblyman Ean Yong Hian Wah, was taken in for questioning by the MACC yesterday at its 14th floor office in Plaza Masalam in Shah Alam.

MACC said he was freed but his body was later found sprawled on the roof of a five-storey building next door.

It is unclear if Teoh, a former journalist with Chinese daily Sin Chew Jit Poh, fell or jumped from the MACC office.

Ean Yong and several other DAP lawmakers are at the scene now, including M. Manoharan, Gan Pei Nee and Teresa Kok.

DAP’s Ronnie Liu said the police has confirmed that the body is that of Teoh. He added that he does not understand how this could have happened.

Forensic investigators examine the body of Teoh Boon Hock for clues. Teoh was found dead next to the MACC’s office today, after being taken in for questioning yesterday.

At a press conference, the MACC director of investigations Datuk Mohd Shukri Abdul said Teoh was questioned from 5pm yesterday to 3.45am and was released soon after.bod

However, Teoh apparently said he was tired and so he rested on a settee in the lobby. He was seen sleeping on the settee at 6am.

At about 1.30pm, Shukri said, they heard that a body had been found on the 5th floor of the adjacent building and when one of the MACC officers went to investigate, he realised it was one of their witnesses.

Shukri said Teoh was not a suspect but was questioned as part of their investigations into the misuse of state allocations.

Police have not allowed anyone to view Teoh’s body, which has still not been removed at 6.30pm, when his brother was at the scene. According to witnesses at the scene, the body was finally removed about 9.20pm.

In an immediate reaction, DAP supremo Lim Kit Siang expressed shock and asked in his twitter account, “Is there now the first case of death in custody, not police but MACC? If so, heads must roll!”

The DAP leader is in Penang and said he was waiting for a full report about the tragedy.

“What has this country come to?” he asked, adding later he and other Pakatan Rakyat leaders will meet the MACC on Friday for an explanation.

According to Kit Siang, Teoh, an Alor Gajah boy, was to register his marriage tomorrow.

Kit Siang also confirmed he and Anwar will meet reporters at the MACC building in Shah Alam at 10am Friday.

Teoh was taken in for questioning yesterday after MACC officers raided Ean Yong’s office in the State Secretariat as they were investigating complaints about the failure of state allocations to reach the people.

Selangor State Assembly Speaker Teng Chang Khim weighed in by saying the MACC is responsible for the incident.

His lawyer M Manoharan, who accompanied Teo to the MACC office yesterday, said the deceased looked normal and showed no signs of being under stress.

“He was happy and looked composed. I had advised him how to handle the interrogation as I was not allowed in during questioning,” he said.

Manoharan, who is the Kota Alam Shah assemblyperson, last saw Teo at around 7pm yesterday.

The brother and sister of the late Teoh are consoled by Puchong MP Gobind Singh Deo (R), after they arrive at the MACC office.

Ean Yong said it was highly unlikely Teoh took his own life since he was due to register his marriage tomorrow.

"Furthermore, there was no reason for him to linger (after the interrogation) because his car was here," he added.

Selangor executive councillor Elizabeth Wong expressed shock over Teoh’s death and added to the chorus that MACC was responsible for it.

“This tragic incident is another reminder of the recklessness of supposedly public institutions like the MACC in pursuing the goals of their political masters,” she said in a statement.

“Even the police stops interrogating suspects at 6pm. Did the MACC think it holds powers greater than the PDRM when it interrogated Teoh from 5pm to 4am the next day?” she asked.

She said the incident has prompted her not to allow her staff to be questioned by the MACC unless accompanied by legal counsel, adding the police should also seal the office for investigations.

“ Datuk Mohd Shukri … should save whatever honour he and the MACC have left by resigning,” said the Bukit Lanjan assemblywoman.

In a statement, Penang Chief Minister Lim Guan Eng said the MACC must bear full responsibility for this death as Teoh was in their custody at the time.

“MACC should stop its political persecution of PR, especially DAP leaders and members, that does not serve the interest of fighting corruption or justice,” he said. “Such political games have caused the loss of life of a bright young idealistic DAP member.”

“There must be a full investigation on how he died. Unless MACC can clear its name, the public may suspect that Teoh was mistreated and MACC had a hand in his sudden death. There must be full transparency and accountability.

A man lights a candle during a vigil for the late Teoh Beng Hock. – Picture by Jack Ooi

“DAP extends its condolences to Teoh’s family for this tragic loss and assures them that all steps will be taken to ensure that the culprits or those responsible be punished.”

Sekinchan assemblyman Ng Swee Lim, who was weeping openly at the press conference, said he had wanted to take Teoh for seafood yesterday.

PKR assemblyman Xavier Jeyakumar is questioning why a normal young man would want to kill himself over being questioned about state allocations.

A vigil organised for Teoh outside the MACC office was held at 8.30pm tonight. A group of youth unveiled a banner saying: "MACC we want answers and the truth".

By 9.20pm, the scene was beginning to evoke memories of Reformasi protests as at least 200 people had gathered.

Opposition leaders Datuk Seri Anwar Ibrahim, Hadi Awang and Lim Kit Siang are reported to be heading to the site, and are expected to arrive around 10pm. 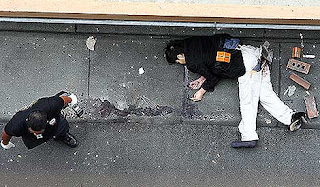